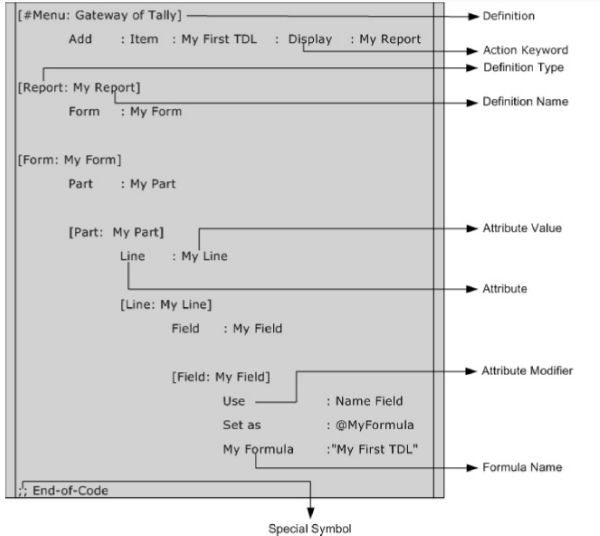 After reading this post in 7 Steps to create your first TDL code will be done. The next chapters will cover each component’s description, application, and thorough explanation. Use the fundamental TDL (Tally Developer Language) structure if this is your first time using TDL.

The Report is run using the already-existing menu item “Gateway of Tally.” Invoking a new Report with the wording “Welcome to the world of Learnwell” from the main menu “Gateway Of Tally” is what this is done for.

The “Gateway Of Tally” menu’s new Menu Item First TDL is added using this code. The report, titled “First TDL Report,” is shown once the menu item has chosen it. The action “Display” was set when adding the menu item “First TDL,” thus the report is in “Display” mode. This report does not allow user inputs. Since the Report only has one field, the sentence “Welcome to the world of Engage to Tech” is visible.

In below image you will find :

So watching after above image we know writing module of a TDL code:

So after understanding above TDL module, we can say:

First write Report – Under Report is Form – Under Form is Part – Under Part is Line – Under Line is Field.

If we under stand above module of TDL we can write any TDL code.

For More learning watch the below video :

Hello Friends! I am Ashish Singh having excellent accounting skills with more than 16 years experience in Tally, Busy, SAP and DMS software. Also having good knowledge of GST Accounting.